The last few days my devotions have been about prayer. One devotion got me thinking about how some of my prayers are recited instead of specific. When I pray for the same people or situations over and over I have a tendency to ask God for the same things.

How do I mix it up? How do I make my prayers specific and yet pray for some of the same people every day?

Each person must have multiple needs, so I should think more and recite less. For example, my Mimi is in an Alzheimer's unit of a nursing home. She is is pain and wasting away. My prayer is always God please do not let her suffer and when it is her time, please take her into your arms.

When I thought about it, instead of rushing through my prayer time, there were many things I could pray for that would be helpful.

Whenever I see rays of sun coming through the clouds, I feel like God is shining through on me. When I am old and not myself anymore, I hope someone will pray for me to still feel God's love shining through. 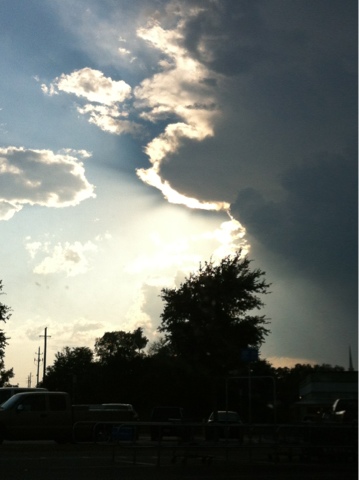 Always, Continually, In All Circumstances

Rejoice always, pray continually, give thanks in all circumstances; for this is God’s will for you in Christ Jesus.
1 Thessalonians 5:16-18

I have the hardest time with these words. Rejoicing is easy when things are easy. The problem I have is rejoicing when things are difficult. I have to admit my difficulties are nothing compared to what some people are going through. The things that challenge me are a mean word, or a mean look. I know it comes with having teenagers, but it still pushes me to the edge. I suppose my behavior must frustrate God, but He never gives up on me. I must continue to try and rejoice.

Pray continually is a little but easier. As I have gotten older I find myself praying off and on throughout the day. Someone comes to mind, pray for them. Someone is mean to my kid, pray for them. I have to admit it usually takes me a moment or two to refocus from frustration to praying!!! Rock the baby who won't go to sleep, pray for them. Pray, pray, pray!

Give thanks in all circumstances, again is easy when things are easy and hard when things are hard. I have so much to be thankful for and yet those little annoyances get me off track. Pick up the cotton balls and nail polish remover again. Wash the dishes used to bake brownies again. Call, no answer again. Little things. Dumb things.

Lord, help me to focus on You. All the time. Help the mean words and looks to bounce off of me. Help my prayers to be sincere. Help me to remember all I have to be thankful for. Help my heart to be overflowing with love even when I get frustrated. In Jesus name I pray.
Amen
Posted by Beth Smith at 7:57 AM 2 comments: 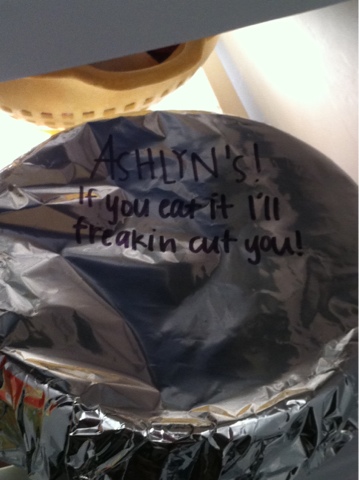 "He chose poorly" from Indiana Jones and the Last Crusade

Do you remember the Indiana Jones movies? In the movie, Indiana Jones and the Last Crusade, Indiana gets involved when his estranged father, Henry Jones, is kidnapped by the Nazis.The Nazis are hoping Indiana will recover the cherished Holy Grail. 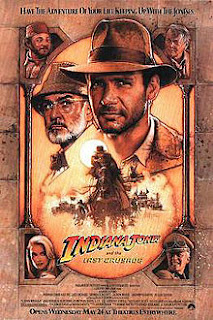 The story culminates when Henry gets shot. Indiana proceeds to the room containing the Holy Grail. He is followed by and Elsa and Donovan (the bad guys). The room holds the Last Knight who has been kept alive for 700 years. The room has several rows of chalices on display. Elsa quickly chooses the most lavish chalice and gives it to Donovan so he can drink from it. He disintegrates into dust. The Last Knight says, "He chose poorly." 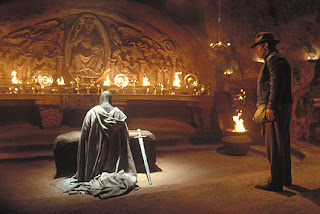 Indiana realizes that the Holy Grail belonged to a humble carpenter and chooses the simplest chalice. He fills it with water and pours the water on his father's wound and gives him a drink. Henry's gunshot wound heals. As they prepare to leave, the Last Knight warns them not to take the chalice past the great seal. When the chalice falls in an abyss, Elsa tries to retrieve it and falls to her death. Henry is about to suffer the same fate, when his father tells him to let it go.

Say to them, ‘As surely as I live, declares the Sovereign Lord, I take no pleasure in the death of the wicked, but rather that they turn from their ways and live. Turn! Turn from your evil ways! ’
Ezekiel 33:11

This scripture reminded me of this movie. The Lord does not want us to die as wicked beings like Donovan and Elsa did. He wants us to turn from our evil ways and live. Indiana got caught up in the moment and almost went to his death by following Elsa.

I have seen so many people follow someone else and lose their way. I have seen good people do unexplainable things when influenced by evil.
Here are some examples:
Mean comments about a parent volunteering to help with a student dinner.
Mean tweets when a "friend" wins Prom Princess.
Mean comments on FB for no reason.
Mean texts by someone pretending to be someone else.
Mean letters pointing out every annoying thing about a "friend".
Mean words seconds before the Homecoming Queen winner is announced.
Mean words and actions spurred on by jealousy.

I am not a Bible scholar, but I am pretty sure this is not what God intended for our behavior to be like. Turn from your evil ways and live. Live like God wants you to. Let that meanness go and take the high road. If you don't change your ways, you will have to account to God for your behavior. He does not take pleasure in the death of the wicked, but want us to turn from those ways and live like He intended.

Posted by Beth Smith at 9:56 AM No comments:

Do Not Lose Heart

Yea, though I walk through the shadow of the valley of death, I will fear no evil; for thou art with me.
Psalm 23:4


These two Bible verses were part of my devotions last weekend. It never ceases to amaze me how God knows exactly what we need.

We had been to see Mimi and when we got back in the car, I opened my devotion. I was stunned and pleased to read the words of Paul. Her outer self was wasting away, but she was being renewed day by day. What a relief! This momentary (in God's time) suffering was preparing her for eternal life. It reminded me that even in difficult times God is there overseeing all of it.

If you or someone you know is suffering, turn to God. He is waiting, providing, comforting. 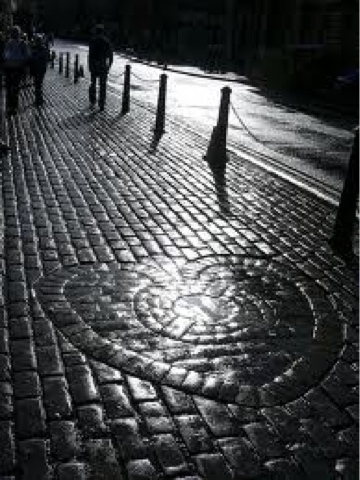 Posted by Beth Smith at 7:18 AM No comments:
Labels: Shadow of death

It was a long weekend. My grandma, Mimi, is failing. My sister Donna decided that she would make a visit to Mimi. She would drive from Ohio to Missouri.

My other sister, Katie, decided she would drive up from College Station. She asked me if I wanted to "ride" with her. So at 8pm Thursday night Avery and I drove to College Station. We arrived around midnight.

The next morning, my nephews woke us up bright and early with alarms blaring!! Our plan was to drive to Missouri. It took twelve hours and about six stops!!! We got to dad's house around 8pm.

The next day we went to the nursing home. It was just heartbreaking. Mimi is very frail and slightly unkempt. Her hair is straight. She no longer does her weekly appointment to get her hair done (even in the assisted living and nursing home she always had her hair done). She does not recognize us and seems sort of lost.

We pushed her wheelchair to her room and helped her get in bed. Donna fed her some soup for lunch. She settled in and seemed to rest. I sat on the bed with her and held her hands. I told her, "I love you." She said, "I love you too." That made the whole trip worth it. I knew she always loved me, but it was nice to hear it one last time.

When we went back to Dad's, I called Quentin. Since there is no reception for my cell phone, I had to go outside. As I was standing there talking to him I looked at the shrub next to me and guess what? There was a little bird sitting there watching me. It was a baby bird and he was nervous. He sat very still as I talked and then as I took some pictures.

I think that little bird was there to remind that God was near. Even in the most discouraging situation, God was right there by my side. The power belongs to God and He supports me during the good and the bad times. 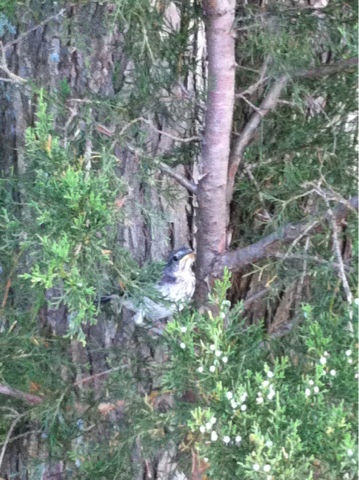