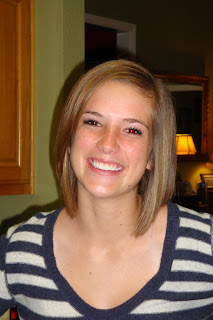 As a parent, I like to think I know what is going on with my two daughters.

This morning I was drinking my coffee as the girls got ready for school.  The cats were in my lap.  Malley was under the blanket and Nacho was on top trying to figure out what Malley was doing under there.

Ashlyn called me and asked me to come back to her room.  When I walked back there, she said, "Not in here.  Come to the office."

I followed her into the office and she said, "Can you finish typing this paper for me?  I am out of time."

I questioned her about the paper, "What do you mean?"

She said, "I wrote the paper for English and typed it at school, but could not save it, so I had to re-type it at home.  Please just type it and do not put in the parts that I crossed out."

I could tell she was starting to get stressed.  It was almost time to go the school and she was not ready.  Plus Bobby had just texted Avery and needed a ride.  Time was getting short.

I started typing the remaining few paragraphs of the paper.  When I started reading, I was amazed at how good her writing was.  The wording was excellent and her descriptions were crisp and clear.  But then it happened - I could feel the fear and desperation from her story.

The paper started with a prayer to God asking for courage.  She had written about the surgery she had on her foot in May of this year.  The account detailed finding out she had to have surgery, going to the hospital for the surgery, waiting, having the surgery, waking up in recovery, getting crutches, going home and the slow recovery.  She ended the paper with another prayer, asking God to help her get through the next few months with ease.

I really felt like I had let her down.  I took her to school because Avery had to leave to get Bobby.  On the way to school I told her, "I am really sorry that I did not understand what you were going through with your surgery."

She said, "It is ok.  I am thinking about talking to Coach and telling him I will not play basketball this year."

Now was my chance.  I could share this moment with her, since she was opening up to me.  I said, "Can you still be a trainer?"  While going through her surgery and therapy she had mentioned being a trainer in high school and maybe becoming a physical therapist as a career.

The long story short is that I feel like I failed understanding the depth of her fear and worry about the surgery.  Can I make it up?  No not really.  Can I do better next time?  Maybe.

The great thing that came out of this was Ashlyn turning to God in her time of fear.  Through my failure, she grew.  She turned to God when she needed Him and that is awesome.

Dear God,
Thank you for giving me this awesome daughter.  She is a light in my world.  Thank you for being there to support her when I fail.  Thank you for holding her hand before, during, and after the surgery.  Help me to be more aware.  Help me to not be so harsh and to encourage my daughter to share with me.  Thank you.  Amen
Posted by Beth Smith at 9:16 AM